September 13th will mark 35 years since Elton played Central Park in New York City. One of his costumes consisted of a keyboard design and was the brainchild of Andre Miripolsky. The artist told Eltonjohnworld.com's Chief Editor about this--and lots more.
EJW: How did you and Elton meet?
AM: He attended a show of my paintings in 1980 at--believe it or not--a combination art gallery and shoe store. I got to talk to him as he was having a pair of shoes made: He had to wait about two hours!
EJW: What did they look like?
AM: They were kind of like Earth shoes, and laced on one side.
EJW: Did you attend the Central Park concert?
AM: No, although I've seen others . . . I didn't even know he was going to wear the outfit there; then the next day, I saw a picture in Time magazine.
What's interesting is that three or four months after meeting Elton, I was approached by an embroidery guy who was a fan of mine. He suggested doing something together. Then two weeks later, I got a call from Bruce Halperin, a clothes maker, asking me to come up with some designs for costumes Elton could wear in concert. I wanted to be sure these could be seen clearly by his large audience, so I teamed up with both Bruce and the embroidery guy. . . . It worked perfectly, as the design, with the metallic threads, reflected the light.
EJW: Did you make anything else for Elton?
AM: There were 7 costumes in all--same basic shape, which Bruce was responsible for, along with a hat. One had art embellishing his name all over. Another, a chain design, was worn by Elton when he appeared on the Tomorrow show with Tom Snyder. (A photo from the broadcast can be seen below this article).
These were all sold at auction in 1988. Before that, Elton also wanted me to design a piano  - but got too busy. I still have the model, which he got to see, and would still like to do this.
EJW: You worked for the Tonight Show from 1997-2004. What did this entail?
AM: I created panels--including the faces of Comedy and Tragedy--for guest appearances. That included Elton, in 1997. This was the first time in the over 50 year history of the Tonight Show that NBC commissioned an outside visual artist to create original scenic art of this scale.
EJW: Do you believe your multicultural background - being born in Paris and raised in Iran, Thailand, Australia, Indonesia and Korea - impacted your work?
AM: I'm sure it must have. I know my dad, also an artist, did. I was just eight when I knew I wanted to make art. Many years later, before he died, we had a father/song show together.
In fact, I consider my latest major assignment, a mural at the School of Arts and Enterprise in Pomona, to be a tribute to him.
EJW: You've also said that you consider it to be kind of a 35 year arc from Elton in New York's Central Park to downtown Pomona, California. Did you mean this literally or figuratively?
AM: Figuratively. I've completed the design for a mega mural project in the Arts District, but never did a building before. Just as I hadn't worked with clothing before getting the job with Elton! 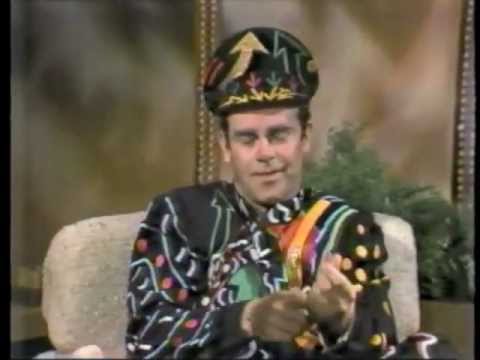