Variety reports that during a screening of the finale of FX's three-season series, Pose, Ryan Murphy surprised attendees with a special appearance by two well-known fans of the show: Elton and David Furnish.

The couple joined Murphy, co-creator Steven Canals and stars MJ Rodriguez and Billy Porter onstage at the Rose Bowl in Pasadena, California, on Saturday during a post-screening Q&A.
Elton revealed how he's been impacted by the authenticity of the show's storylines and characters, saying that he ''lived the AIDS epidemic in the 1980s'' and that this series touched him ''because of the journey that these people are on. . . . They're real people, and they're trans people who've made their life possible.''
But they've had to fight for it--and still have to fight for it, and that shouldn't be, he added.
David felt the drama offered a valuable education for generations who are unaware of the history of HIV/AIDS, paving the way for less stigma and greater awareness of medical advances now used to combat and control the disease.
''With the medicines that we have today, if everybody knew about HIV, knew they were at risk and had access to testing and treatment, we could stop this disease dead in its tracks. It's really important that we don't forget, and Pose just brings it to life so, so magnificently.''
It was then revealed that Elton and David rescheduled their vacation plans so they could attend the event.
''A lot of praise should be given and a lot of credit to Ryan for making sure this program got made because it's true. It never rings false,'' Elton remarked. ''And those outfits--my dear!''
The vocalist brought up one Pose character, proclaiming, ''I am totally Elektra.''
And Murphy brought up a story from his childhood that he'd long wanted to share with Elton. As a gay seven-year-old, he wasn't able to connect with his dad . . . until one day Philadelphia Freedom came on the car radio.
''I was like, 'You know what, I'm just going to be me,' and I performed the shit out of Philadelphia Freedom in the back seat, and my father saw me for the first time, thanks to Elton John. We pulled into my driveway and he looked at me and he goes, 'You have a good voice,' and it was the first time he had ever said anything kind to me. So you're so a part of my life, Elton, in a way that you'll never know.'' 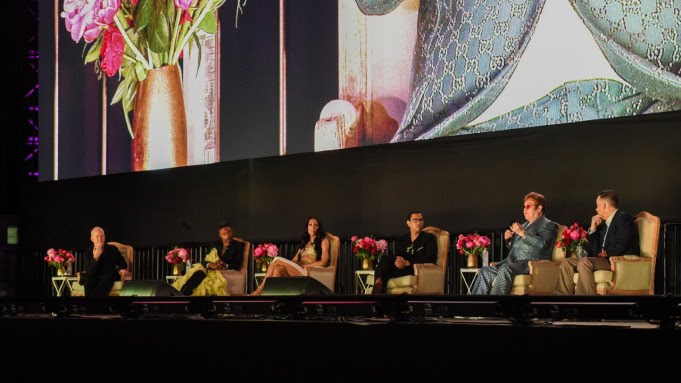