HomeNewsTaupin's ''Candle in the Wind'' Reflections

In February 1998, three pages of handwritten lyrics of Candle in the Wind 1997 and a printed final version autographed by Elton and Bernie Taupin were sold at auction to the Lund Foundation, a children's charity which was created by Walt Disney's late daughter. The money went to Children's Hospital Los Angeles.

Sharon Disney Lund's son and Walt Disney's grandson, Bradford, was treated at CHLA until he was 6 months old. ''They changed my life. It's a way to pay them back,'' he explained.
Christie's also offered a 34-page colour catalogue to commemorate the writing of the song. The $20 catalog, benefitting CHLA, detailed how the tune was written and the long working relationship between John and Taupin.
Bernie's latest Instagram post recalls the auction, which raised $400,000.
He adds: ''The original recording of the song sold over 35 million copies worldwide, becoming the biggest selling single of all time. The proceeds were donated to the Diana, Princess of  Wales Fund. Not bragging, just happy it did some good.''
Proceeds from Candle in the Wind 1997 raised about $62 million for Diana's Memorial Fund. Bernie has said that he didn't know the princess, but was touched by her death.
''I was incredibly moved by the outpouring of grief. I made sure the song wasn't from an individual, but that it was coming from everybody. I guess it struck a chord.'' 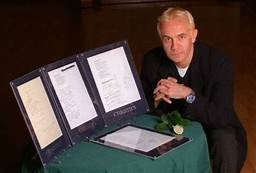