Elton is recommending a new book by Ai Weiwei.

A blurb on the publisher's website reads: ''Ai Weiwei is one of the world's greatest living artists. He is a master of multiple media. His work is always thought-provoking, unpredictable, and immensely personal.''
The autobiography, 1000 Years of Joys and Sorrows, is due in November.
In 2021, Elton dedicated his show in Beijing to the Chinese artist and dissident, citing Ai's ''spirit and talent.''
Ai, who met the headliner before the concert, was surprised and touched by the gesture. He also wrote online: ''I super like him.''
The following year, the Ai Weiwei Studio made a commercial for the Elton John Foundation's Love is in my Blood campaign. Ai also was among the creatives who donated works to be auctioned off by Sotheby's to benefit the EJAF. 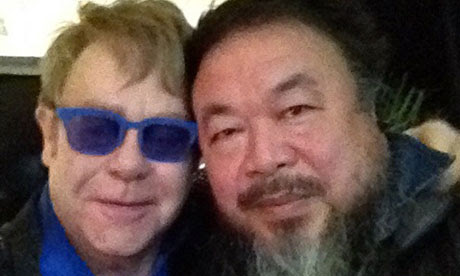