The owner and CEO of the Indianapolis Colts would like to set up a place to showcase his goods, which includes an instrument once owned by the Rocket Man.
Jim Irsay owns a variety of sports, music and historical artifacts and is looking into Nashville, New York, and Los Angeles. Boston, Chicago, and Austin are also under consideration. He has loaned some of his collection for museum exhibits or displayed them at private showings, but hopes to secure a permanent location.
In July, Jim purchased an autographed piano used on Elton John tours from 1974 through 1993. He bought it for $915,000 from Heritage Auctions.
Incidentally, Heritage Auctions will soon be offering more EJ items.
Next month, there are plans to sell a copy of the Captain Fantastic and the Brown Dirt Cowboy album, signed by Elton and Bernie Taupin, as well as a Rock of the Westies tour jacket. Made by Felco, this is a baseball-style jacket with ''Steve'' stitched on the left breast and ''Elton John/Rock of the Westies'' printed on the back.
These jackets (a sample follows) were made for the famous concerts at Dodger Stadium in October 1975. 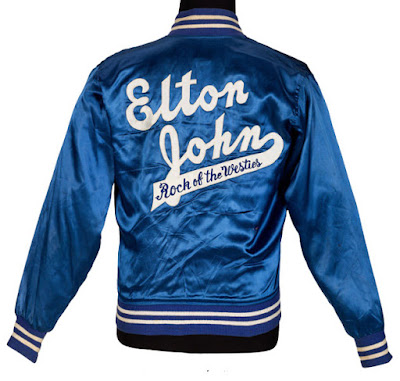