Elton was among the honorees at the 2021 BMI London Awards.

The annual awards show honoured the top UK and European songwriters, composers and music publishers, as well as the prestigious Song of the Year prize going to songwriter Tom Barnes for Lewis Capaldi's hit, Before You Go. A number of BMI Million-Air Awards were also handed out to ''recognise the iconic songs that have reached a million or more broadcast performances by UK and European songwriters and publishers.'' Elton got three of these: Bennie And The Jets and Don't Go Breaking My Heart (a photo of Elton and his Don't Go Breaking My Heart partner, Kiki Dee, is below) each reached 7 million performances, while I Guess That's Why They Call It The Blues received 6 million.
Among other Million-Air Award winners were Gerry Rafferty's Baker Street; Sting's Don't Stand So Close To Me; Freddie Mercury's We Are The Champions; Shania Twain's That Don't Impress Me Much; and John Lennon's Hello Goodbye. 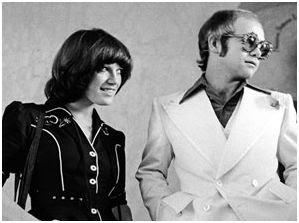