Bob Geldof, the man behind Live Aid which featured Elton, David Bowie, Queen, and a slew of other legends, turned 70 on the fifth of October.

Four days before his birthday, the philanthropist was treated to an early birthday salute while visiting Ireland's Late Late Show.
Elton, Bono, the Edge, Ringo Starr, Sting, Van Morrison, and Roger Waters sent video greetings to the Boomtown Rats frontman.
The former said: ''Those 70 years represent a legacy of great music and much more. You literally changed the way the world saw catastrophe and need.''
The following picture was taken in 2005 of Elton and Bob at the opening night and world premiere of Billy Elliot The Musical at London's Victoria Palace. 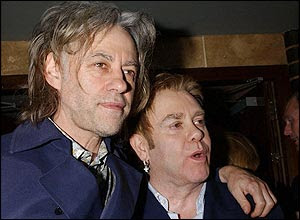