A onetime Watford defender has shared his thoughts about Elton with Planetfootball.com.
He recalled that Watford found themselves in financial trouble in 2002, when ITV Digital collapsed. Low audience figures, piracy issues, and an ultimately unaffordable multi-million pound deal with the Football League led to the broadcaster suffering massive losses. But Neil Cox said that Elton helped the players gain back the money they missed out on.
He commented: ''We had to take pay cuts and I was captain and had to sort it out. The PFA wouldn't help at all. After we got two two cup semi-finals, I was the one who went to the club and asked for our money back. Eventually, new owners came in and we got our money back. Elton John actually helped us get it.''
He met the keyboard player a couple of times.
''One year we had a Christmas party where we all dressed as Elton John. We sent him a picture and within two hours he had sent money to the pub for some drinks.
''He would sometimes come into the dressing room before games and he knew everythng about every single player. He would even know the names if my daughters. He knew the back back to front.'' 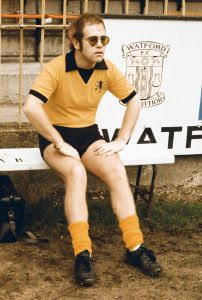