''It crucially leads with 20 million pounds of new funding for opt-out HIV testing to find those who are living with HIV and unaware of their diagnosis in places with the greatest need,'' says Elton, seen here with another crusader against AIDS, his husband David Furnish. 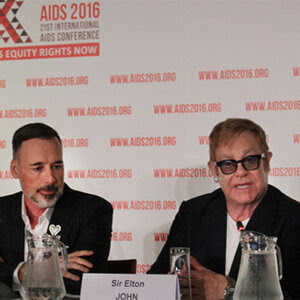 ''We look forward to continuing to work with the UK government to reach the interim target of 80% reduction in new cases by 2025 with the ultimate goal down to zero new cases in 2030 and welcome the commitment to annual reporting to Parliament. Now, we need improved at-home testing, PrEP provision in primary care, better post-diagnosis support and an enhanced focus on the health inequalities and stigma which continue to exacerate HIV to ensure the life-changing goal is achieved.''
In the States, the EJAF is ''thrilled to mark this important day with their next series of HIV testing events throughout Atlanta with Walmart.''
With an estimated 250,000 people in the Southern United States living with HIV but lacking such services, this partnership is helping them reach those who wouldn't normally seek out HIV testing so they can receive treatment sooner.
Walmart and the EJAF announced in June that the organisations were working together to help accelerate the end of AIDS in America. Today is the third time the teams will host testing events, joining forces with AIDS Healthcare Foundation and Atlanta Harm Reduction Coalition to provide free HIV testing along with education materials and resources during four parking lot testing events at Walmart locations in Georgia.
Last month, Walmart announced the launch of Elton John Eyewear (at both Sam's Club and Walmart locations). The launch of the eyewear also furthers Walmart's support of the Elton John AIDS Foundation's mission. Walmart Inc. will donate at least $1 million annually from the eyewear collection to support the EJAF.
Share this News
Tweet
Whatsapp