Before joining Yes, Rick Wakeman was a session musician in London. One of the recordings he played on was Madman Across the Water.

In 2021, Rick talked about what this was like: faroutmagazine.co.uk/working-with-john/.

The keyboardist remarked: ”I think the world of Elton, but he doesn’t suffer fools gladly. He’s got a very short fuse on that front, and I probably have too. Because then you’re trying to achieve something musically and somebody hasn’t done their job, it can really screw things up.”
He said that the two worked together prior to Madman Across the Water–at a concert at the Royal Festival Hall.
”I was in the band playing Hammond organ. He was a bloody good piano player, but he never did like playing the organ.”
He added: ”I think his celebrity status is brilliant these days. I’d hang out with the Beckhams too if I could. The thing is, he doesn’t have to hang around with them to get in the papers. I genuinely have the upmost respect for everything he’d done. And if tantrums are part of his make-up, then so be it.”
Here’s a picture of Elton from around that time period. 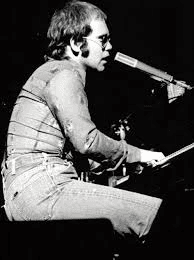